Exceptions to Forced Arbitration in Colorado

Often, a contract will include a provision that requires the parties to resolve their dispute through binding arbitration. This means that you’ve waived your right to file a lawsuit and present your case to a judge or a jury. In Colorado, arbitration of disputes is favored and courts will enforce an unambiguous arbitration clause. There is good and bad with arbitration. On the positive side, arbitration is much quicker, it’s usually less costly and discovery is much more limited. The negatives are an adverse arbitration ruling is generally not appealable, damages awardable to a plaintiff will usually be less and it’s difficult to discover favorable evidence with such a truncated discovery phase. Usually both sides are responsible for payment of the fees due to the arbitrator which can make arbitrating a smaller value case less cost effective. 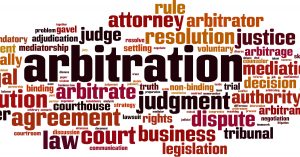 The Colorado Supreme Court held that the plaintiffs could not be forced to arbitrate their claims unless these defendants could demonstrate all the elements of equitable estoppel, including detrimental reliance. This is significant because it establishes a higher bar to a party seeking to compel arbitration based only on the principles of equitable estoppel without a written agreement compelling arbitration. This means that the party attempting to force arbitration must show the other party led them into believing they agreed to arbitration of their disputes; they did this deliberately and intended to do so; the party claiming estoppel was ignorant of the true facts; and the party asserting estoppel detrimentally relied on the other party’s conduct. With such a significant burden, it seems unlikely that a party will succeed at compelling arbitration without a written agreement.